Intel Core i5 12400 and 12400F are the best additions in the Alder Lake lineup where not only you are getting 6 cores and 12 threads for awesome gaming and productivity performance, but you are also getting the most out of your money spent.

After successfully beating the Ryzen 5600X by giving higher value per dollar spent, it makes more sense to get the i5 12400 or 12400F if you want to have the best gaming experience. The best thing is that due to 12400/12400F being locked, you can put it on a cheap H610 motherboard that will reduce the overall expense.

Gigabyte has a couple of H610 motherboards that are almost identical to each other except for the H610M HD3P which has one more power phase. The S2H DDR4 shown above, however, features the 6 power phase VRM which every other H610 Gigabyte motherboard shares in common. All these motherboards have the same PCB layout but the I/O of this one is much better.

While one can easily get convinced by the HD3P due to its VRM and more PCI-E slots, it doesn’t have enough USB ports at the I/O which are the most important I/O features. The S2H DDR4 features 6x USB ports, 2x PS/2 ports for connecting old peripherals, and multiple display outputs including the VGA, HDMI, DVI, and DP.

There is a single M.2 slot for storage and 4x SATA ports for SATA drives that are the most common in standard entry-level motherboards. On the PCB, you will find 3x fan headers in total including the CPU fan header as well as an RGB header that were mostly absent in the previous generation entry-level chipset motherboards. So, with these, you can achieve both the tasks of cooling your chassis and connecting an RGB device.

This motherboard will be one of the cheapest options for the i5 12400/12400F but it is definitely not the best one as there are some absent features that you might need.

Gigabyte has a dozen B660 chipset motherboards and while some are very basic, some go up to the looks of like a budget Z690 motherboard. The problem with going with a higher-end B660 chipset board is that unless you require those fancy heatsinks and a lot of power phases, they are not needed for the i5 12400/12400F. Therefore, the best for money is the B660M DS3H AX DDR4.

Carefully considering all the offerings from Gigabyte, this one is actually decent for its price. While you have to pay a price of $190 to buy something like the B660M Aorus Pro AX DDR4, DS3H AX DDR4 will cost you only $140 making a perfect combination. Yes, you will find it less attractive than the higher-end B660 motherboards but if you want a board with RGB LEDs and a fancy design, you can keep on reading and for those who have a tight budget, this one won’t hurt the pocket. The Intel Core i5 12400F is without any doubt, currently the best budget gaming processor that can easily max out games even on resolutions higher than 1080p. This chip officially costs $180 and brings the best specs compared to its predecessors as well as to the competitors from the Red team considering the Ryzen 5000 …

It comes with a 6-power phase for CPU cooled by a small heatsink. There are dual PCI-E x1 slots for expansion cards and a single PCI-E x16 slot for the graphics cards. Good thing is that you can use any expansion card on those PCI-E x1 slots except the Wifi as it already comes with an inbuilt one. However, if you have a hunger for faster speed, then you can buy a dedicated one.

The next impressive thing about it is the presence of several USB ports at the I/O. Most budget motherboards don’t come with as many USB ports as it features. It has a total of 8x USB ports and two display outputs to connect to your monitor. Besides the Wifi Antennas, you will also find a fast 2.5G LAN port if you prefer lower pings. 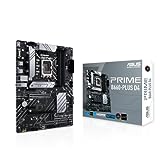 Asus has several mid-range as well as high-end B660 motherboards. Now you won’t need a 12 or 16-power-phase motherboard for i5 12400/12400F, that’s why this Prime B660 Plus D4 is the best option as it features 8 power phases that should be enough for maintaining the turbo boost without overheating no matter what temperature is outside.

The heatsinks over the VRM are large enough to achieve lower temperatures and add to the aesthetics of the board. This board is packed with several other features as well. Unlike the Gigabyte one listed above, it has 4x DIMM slots that support highly clocked DDR4 RAM modules and for storage, there is not one, not two but three M.2 connectors along with 4x SATA ports. Moreover, you also get a Key E M.2 slot for the Wifi module.

I think it’s just perfect for its price and the only thing you need to add is a Wifi module if you want to connect to the internet wirelessly. Otherwise, you can also use the fast Realtek 2.5G LAN if you prefer faster speeds.

MSI has only two motherboards in the H610 category, however, both of them are exactly identical to each other except for the I/O where you will find a single difference. Going by that, the H610M-G is the better one as it comes with a DP port which will be beneficial if you are going to use the i5 12400 that comes with integrated graphics. However, there are 1x VGA and 1x HDMI ports as well.

Looking closely at its VRM design, I think it features 6 power phases as it uses doublers but I could be wrong here. Still, it won’t matter a lot as it will be sufficient for the i5 as well as other locked Alder Lake CPUs. As usual, there are no heatsinks over it as it is very entry-level and features all the basic features just as the Gigabyte H610M S2H DDR4.

However, there is one major difference here. It also comes with Debug LEDs which is the biggest advantage of MSI motherboards over the other manufacturers. This will be extremely helpful whenever your system is not booting and it helps to identify the malfunctioning component. Also, it has sufficient USB ports at the I/O for peripheral connectivity but if you want to use wireless internet, then you will need a wifi adapter or a wifi PCI card.

MSI is very much similar to Asus when it comes to B660 chipset motherboards and offers several types of motherboards that feature high-end features as well as fantastic aesthetics. Again, we are not going in the high-end section but instead to something where you can get the job done without compromising much of the performance and productivity. The Pro B660M-A Wifi DDR4 looks fit for this job.

It comes with denser heatsinks over the VRM and through the images, it is not easy to figure out how many phases it comes with but it should be at least 8 phases with doublers i.e., it is definitely better than the Pro H610M-G. It has 4x DIMM slots, 2x PCI-E x16 slots for graphics cards, and a single PCI-E x1 slot for any other expansion cards.

It comes with an inbuilt Wifi 6 adapter and a Realtek 2.5G LAN both of which are fantastic for high-speed internet and will deliver lower pings. For storage, there are 4x SATA ports and 2x M.2 connectors as well. At the I/O, it is rich with connectivity ports where you can find dual HDMI and dual DP ports for display and 6x USB ports for peripherals. Also, there is a PS/2 port for an older mouse/keyboard if you want to use one.

As usual, it also comes with EZ Debug LEDs for troubleshooting and all of these features will cost you less than $140.

However, to be on the safer side, I recommend going with the B660M Phantom Gaming 4 which has 9 power phases cooled with decent-sized heatsinks. The PCB is all black but the white heatsinks and white chipset look great as accents.  It has dual PCI-E x16 slots and a single PCI-E x1 slot for expansion cards. There are 2x M.2 connectors for fast SSDs and a single M.2 Key E connector for the wifi module. It has a decent I/O with 6x USB ports, 1x PS/2 port, 1x HDMI, and 1x DP ports for display. The Best Z590 Motherboards for Gaming and Overclocking The Best Motherboards for Intel Core i5 10600K The Best Motherboards for Intel Core i5 10400F