UNCHARTED 4 – a game that is loved by all

Set three years after the events of Uncharted 3: Drake’s Deception, Nathan Drake has presumably left the world of fortune hunting behind. However, it doesn’t take long for adventure to come calling when Drake’s brother, Sam, resurfaces seeking his help to save his own life and offering an adventure Drake can’t resist.

On the hunt for Captain Henry Avery’s long-lost treasure, Sam and Drake set off to find Libertalia, the pirate utopia deep in the forests of Madagascar. Uncharted 4: A Thief’s End takes players on a journey around the globe, through jungle isles, urban cities and snow-capped peaks on the search for Avery’s fortune.

In Uncharted 4, however, we find protagonist Nathan Drake leading a quiet life with freelance journalist Elena Fisher, who happens to be his wife. They live in New Orleans. They have a three-bedroom house. They play video games together.

But this all changes with the return of Nathan’s older brother Sam, who was presumed dead for 15 years. Not only is he alive and well, but he’s fallen in with criminals, and needs help paying a debt. He also has a lead on one of history’s greatest treasures: the loot of the pirate Henry Avery, which the brothers have sought since their early days of treasure hunting. Now, with Nathan forced out of his calm life, they set off to chase the treasure.

Sam’s arrival not only disturbs Nathan’s newfound life, but complicates his emotional life as well. Uncharted 4 gives us insight into his past, and the way it shaped his mind: “how he despises authority; how he uses humor as a shield; how he long ago accepted violence as a justifiable means to an end “. Uncharted 4 tells this story with affection, showing an expert attention to detail in the way Nathan’s voice falters when discussing his childhood, or how he stares at Elena when she’s not looking. These details are so damn realistic and so much human. They bring the characters to life.

Uncharted 4 revolves around third-person combat, climbing, and puzzle-solving. But, unlike its predecessors, this game often lets you sneak past enemy soldiers without doing any harm at all. This is a clear influence from The Last of Us, developer Naughty Dog’s darker take on a third-person adventure. Stealth requires a patient, measured approach.

“There are minor mechanical problems: the cover mechanic can send you to the wrong obstacle or wall in the middle of firefights, and rarely, Nathan will grab the wrong ledge when climbing. But these observations wash away within the grand scheme of things.”

The greatest improvisation in the gameplay comparing to its predecessor’s is the introduction of grappling hook. You can attach the grappling hook to specific points. Most arenas have at least one grappling point you can latch onto, allowing you to swing to higher ground or simply bang your enemies while suspended from the ceiling. It’s incredibly more fun than engaging in battle and keep on shooting the guys.

The grappling hook also adds some much-needed variety to climbing. Swinging on a grapple point affords Drake a free range of motion. Climbing feels more improvisational. Many walls or mountains feature multiple routes, making it feel like you’re making your own path up a surface rather than following a preordained trail.

Uncharted 4 offers a free-roam feature in some of its locations. Free-roam design is repeated in several of Uncharted 4’s chapters, which give you the ability to roam freely over massive, open environments, like savanna filled with explorable ruins or an archipelago filled with underwater cave systems.

Deep into the Game

The best thing about Uncharted 4 is how it directs you with its camera and lighting, guiding you to the correct ledge or doorway or crumbling wall as you leap through explosions and plumes of smoke. Audio clues also aid you – characters shout over the gunfire, telling you when to fight and when to keep running. The dialogue makes sense within the moment.

The cinematography, both in-game and during cut scenes is at its best. It amplifies the wonder of this gorgeous world. “It’s not enough to call the jungles lush. They’re vibrant. It’s not enough to call the game’s version of Scotland vast. It’s majestic.” There’s also incredible animation and graphics at play, and it sets a new trend for games in the way it can illustrate subtle emotions like distrust and yearning. The game’s world is bathed in vibrant hues and gorgeous detail.

Sweeping camera shots and intimate close-ups tie the characters to the beautiful locales, as Drake gazes toward mythical places he only dreamed of as a kid. Uncharted 4 doesn’t root its visuals in the hues of realism, but rather, paints the world as it might look to someone intent on exploring every inch of it–someone intoxicated by the prospect of adventure.

Uncharted 4 is a remarkable single-player journey. Uncharted 4 is so punctual and so accurate that, you get the sense that its characters are thinking things we’ll never hear out loud. “We have a lot of ground to cover,” one person says. Is that in reference to the journey, or the first uncertain step toward forgiveness? We can read it however we want.
Uncharted 4’s gameplay pushes the narrative forward, the narrative feeds off its gameplay, and every detail combines to create something bigger. Uncharted 4 bounces between personal moments with so much grace, with so much skill and affection for its characters, that you don’t mind when the guns stop firing, and the smoke clears, and Nathan gets a moment to breathe.

There are four modes in the game’s multiplayer: Team Deathmatch; Plunder; Command; and Ranked Team Deathmatch. The most enjoyable qualities of multiplayer is that your teammates can be revived when they are in the down-state and most of all the grappling hook which brings up hell lot of fun to the game. Plunder and Command are more fun than deathmatch.

Command is a map-domination variant that places greater emphasis on teamwork by putting a target on the back of the strongest player in each team – the ‘captain.’ As you try and capture territories and hunt the enemy’s captain, you also have to protect against the opposing team trying to kill yours. You’ve got to be even more alert than usual, even as you’re pursuing an objective.

Plunder is all about to carrying an idol to a central point on the map before the other team reaches it with theirs. Slowly heaving an idol to your teammate across a giant ravine while being shot at on all sides makes for a hilarious contrast in pace.

Player can spend earned points to temporarily wield supernatural powers like teleportation, which hurtles you across the map, and summon a sarcophagus that attacks the enemy with flying evil spirits can totally interrupt the rhythms of what would otherwise be a normal firefight.

The AI sidekicks available for every player are a clever new addition, too. Instead of buying flashy powers, you can summon enormously handy AI-controlled helpers in battle. They’re capable of fulfilling basic tasks like sniping, brute-force shooting, and healing – as well as giving your opponents something to shoot at that isn’t your head. If you’re up against them, there’s a franticness born from trying to take them down while being attacked from all sides.

It plays beautifully. Because it runs at 60fps, the shooting feels better than it does in the main campaign, and there’s just as much fluidity to scaling walls and swinging, but now with a palpable smoothness.

Naughty Dog did a great job at twisting familiar environments from the main campaign into interesting shapes across eight maps: soaring through the air against a boundless Mediterranean sea before leaping into the opulence of an Italian auction house – all the while shooting at other players – is exhilarating.

These maps are well suited for shootouts, leaping, and magic powers. Wide open spaces peppered with lookout spots make for dramatic shootouts, winding corridors under heaving pirate ships are there for intimate encounters, and spots for the grappling hook are everywhere, meaning every game feels alive with motion.

(NOTE – the game was played in 1080p resolution but I have reduced the quality of pics to 720p to save memory. Do observe the environment details and character details of of the game. It’s a VISUAL TREAT.)

Uncharted 4’s final moments make clear, this is a story about storytelling–the importance we lend our idols, legends, and myths. How we pass down the ones that inspire us. How an old photo of three friends sitting on a pile of gold can unleash a flood of memories. Uncharted 4 is a challenge to the medium. In its writing, in its design, in its understanding of what makes games unique, Uncharted 4 is something to aspire to. It’s a shining example. And we’ll be talking about it for years to come.

Uncharted 4: A Thief’s End is a remarkable achievement in blockbuster storytelling and graphical beauty. Uncharted 4 carries on the series’ proud tradition of peerless polish and style, with a great multiplayer component to boot. Most importantly, it’s a gentle sendoff to the rag-tag group of characters we’ve known for nine years. A worthy thief’s end, indeed.

Naughty dog has given the best ending. Naughty Dog has decided to retire this franchise — no door is left open for a crass surprise sequel — and there’s nothing ambiguous about its resolution. Uncharted 4’s story soars, and presents a moving, fulfilling finale.

One interesting thing I want to share about myself, UNCHARTED 4 is the main reason I bought a PS4.

I would love to share a pic of my gaming desk – 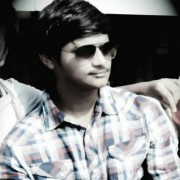 I am Sourya Sarthak, pursuing my engineering in IIIT-Banglore. I am an hardcore and a passionate gamer.
Today’s Amazon Deal