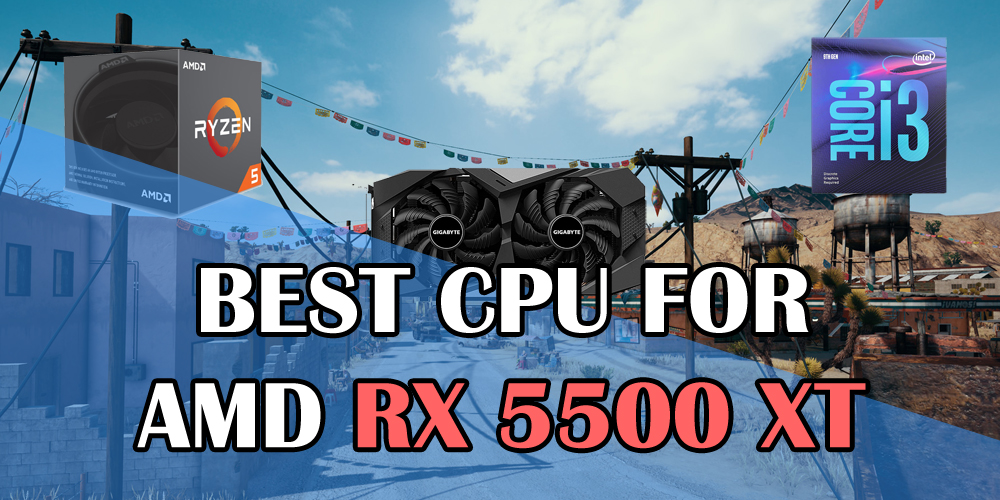 During the last few remaining days of the year 2019, AMD released two of their latest Graphics cards the RX 5500 and RX 5500 XT. Both of these models come in two variants of different memory sizes. The RX 5500 series cards are built on the new gaming RDNA architecture that is equipped with 8GB of advanced GDDR6 memory that is able to provide high bandwidth up to 448 GB/s. The RX 5500 series also features PCI Express 4.0 with a throughput of 16 GT/s and enables two times more bandwidth when compared to PCI Express 3.0 making it more future proof.

The RX 5500 series is targeted for 1080p gaming and therefore, these cards are better matched for those processors which are excellent for 1080p gaming. In this particular topic, we will be providing you with some CPUs that according to us are best suited for the RX 5500 XT.

The AMD Radeon RX 5500 XT is available in two variants, however, we suggest to go with the 4gig one as there is no significant difference in performance on most occasions and moreover it cost approximately $50 less than the 8gig variant. For which RX 5500 XT card you should choose, you can refer to our this topic where we have narrowed down the best RX 5500 XT Graphics Card in detail. The Core i3 9100F when compared with the previous-generation processor, is around 10% faster and also more power-efficient making it the best budget-friendly choice for building a gaming PC for less than $500. Moreover, the Core i3 is a way better option than that of its AMD counterparts.

Intel Core i5 9400F is the latest sibling in the i5 processor series that Intel released back in 2019. The i5 9400f is having 6 cores along with 6 threads and offers max turbo frequency of 4.2Ghz. This processor is the best option when it comes to playing games at 1080p resolution.

The combination of Core i5 9400F along with that of RX 5500 XT is best suited for mid-end gaming rigs, where the gamer will be able to play most of the present-day games with stable FPS at 1080p resolution.

AMD’s Ryzen 2600X is undoubtedly the best mid-end Gaming processors that cost below $200 and can perform almost similar to that of its counterpart i.e. Intel Core i5 9400f but the later cost less. Ryzen 5 2600X features 6 cores and 12 threads and is especially a deal-breaker as it features a high clock speed of 3.6Ghz and a boost clock of 4.2Ghz on all cores without increasing the power consumption above 95watts.

The Ryzen 2600X, when combined alongside RX 5500 XT, will be able to produce almost identical FPS throughput with that of its counterpart the Core i5 9400F. However, they will be more stable and can easily be overclocked with the help of AMD’s software.

Both the Ryzen 2600X and RX 5500 XT can be termed as the best value for money mid-range gaming builds and this combination can run most AAA games with stable FPS at 1080p resolution.

The RX 5500 XT is targeted for 1080p gaming and thus according to us, the best choice of processor is going to the ones we listed here as these processors are quite capable of providing nice gaming performance at 1080p resolution.