Intel Core i3 10100F is currently one of the best gaming processors for $100 and is capable of handling mid-end GPUs like RTX 3060 easily. It is compatible with LGA 1200 socket motherboard and will run on any chipset featuring this socket including the entry-level H410/H510 chipset or even the high-end Z490/Z590 chipset.

However, it is important to note that i3 10100F is a locked processor which means you can’t overclock it more than the official stated boost clock speed which is 4.3GHz. Therefore, investing money in an expensive chipset like Z490 or Z590 is unnecessary except if you really plan to upgrade to something like an i7 10700K/11700K in the near future.

For most of us, upgrading too soon is not a viable option and therefore it is better to stick to an entry-level board that will be adequate for installing all your components and will help you save money to invest in a better graphics card or memory.

You will, however, still need to look for a good motherboard no matter even if you are going with the H510 chipset as certain motherboards come with better connectivity and onboard features that will come in handy. So, I recommend the following motherboards for i3 10100F that will prove to be better than anything else.

Gigabyte H510M S2H is one of the most entry-level motherboards out there but has a good amount of ports and slots to support multiple components and peripherals. While on the H510, you won’t see a lot of expansion slots, all you need is a single PCI-E x16 slot and a single PCI-E x1 slot for graphics card and wifi card respectively available on it.

For storage, it comes with 4x SATA ports and a 1x M.2 connector for a fast NVME SSD. It can support up to 64GB of DDR4 RAM clocked up to 3200MHz which is more than what an H410 motherboard can support and surely a higher-clocked memory module helps in better performance.

At the I/O, there are a total of 6x USB ports and 2x PS/2 ports for peripheral connectivity which is admirable as a lot of entry-level boards don’t have that many USB ports. For internet connectivity, you will get a single 1G LAN but unfortunately no Wifi.

It is not the best motherboard for i3 10100F but can fulfill most of your requirements at a much lower price.

In my opinion, MSI produces the best entry-level motherboards with some features that can’t be found in motherboards from other manufacturers. Although the MSI H510M-A Pro has a standard VRM with 7 power phases and an equivalent number of slots and ports as the Gigabyte H510M S2H, it has one more M.2 slot with E Key for M.2 wifi card.

It allows you to use the PCI-E x1 slot for any other purpose and gives you the flexibility to use connectivity options as you wish. Moreover, at the I/O, you have a single VGA connector for display output which won’t be needed unless you opt for a processor with integrated graphics.

The best feature is, however, the EZ Debug LEDs at the top-right corner that eases troubleshooting several times. These LEDs can show what possible component is not allowing your system to boot if you ever encounter such a problem and these LEDs are generally available on all the MSI motherboards.

ASRock isn’t the best when it comes to motherboards but some of its motherboards in different chipset lineups are really good for their price. For instance, the H510M-HDV/M.2 comes with all the ideal features not found on most entry-level motherboards.

It comes with a Key E M.2 connector for wifi adapter that allows internet connectivity and a 1G LAN. For storage, it comes with 4x SATA ports and 1x M.2 slot and for memory, there are two DIMM slots with similar support as the MSI and Gigabyte motherboards.

The I/O is also great with 6x USB ports in total and on top of that, you get dual PS/2 ports for older peripherals. So, connecting your devices won’t be a problem.

The motherboard also features more fan headers than the above motherboards. There are a total of 3x headers that include 1x CPU fan, 1x Chassis-fan, and 1x AIO pump header. This is certainly beneficial if you want to upgrade to an AIO cooler without changing your motherboard. 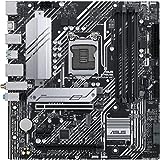 As you might have noticed that the entry-level motherboards hardly come with a heatsink on the VRM. The reason is that they don’t need it in the first place as the VRM on an entry-level chipset like H510 doesn’t require advanced cooling solutions but if you live in a hot place and if your case doesn’t have good ventilation, then the heatsink on Prime H510M-A AC will come into action.

It increases the cooling capacity and aesthetics at the same time. Moreover, the primary M.2 connector also comes with an aluminum heatsink to cool your SSD. For expansion cards, it comes with 2x PCI-E x16 slots for GPU where the primary graphics card slot uses steel armor for more strength and reliability, and 1x PCI-E x1 for other expansion cards.

The I/O on this board is also hands down, the best I/O among all the boards listed here. It contains 6x USB ports including a Type C, 1x PS/2 port, and multiple display output connectors. Moreover, it comes with an inbuilt Wifi 5 adapter for wireless connectivity. This motherboard, therefore, is better in terms of upgradability and component support.

ASRock is certainly not much behind than any other popular motherboard maker. For around $120, it provides you with one of the best budget B560 chipset motherboards that features a solid 8-phase VRM and memory support of up to 4800MHz.

It is a combo of both features and aesthetics where you will see several heatsinks all over the board and RGB LEDs on the right edge.

It comes packed with features like multiple expansion slots that include a PCI-E x16 Gen 4.0 and 2x PCI-E x1 slots for expansion cards. Being a full-ATX form factor motherboard, it comes with more slots and headers than a standard board.

The DIMM slots are 4, the SATA ports are 6 and 3x M.2 connectors are there for fast NVME SSDs. You also get an M.2 Key E connector for wifi module and an Intel Gigabit LAN

Even though Intel Core i3 10100F has been replaced by the latest Intel processors, the value this processor provides you with cannot be replaced.

One of the great benefits you get by using this CPU is cost saving which allows you to invest more in your GPU and other parts.