Z590 motherboards are already here, with the release of Intel 11th gen processors. Though these processors didn’t prove themselves to be as worthy to be upgraded from 10th gen processors, if you are upgrading from 7th or 8th-gen Intel processors, then that would be a reasonable upgrade.

To support the new processors, Intel hasn’t changed the socket from the previous LGA 1200 lineup. That means you can use the 10th gen processors too on the Z590 motherboards. The good thing is that Z590 supports PCI-E Gen 4.0 natively unlike the Z490 and comes with x4 more PCI lanes through the CPU making a total of 20 PCI lanes from the CPU.

While there are only a few basic differences between Z490 and Z590 chipset, it’s always better to get the latest one which has more features, and if you haven’t bought the Z490 board till now.

So, here is the list of top-performing Z590 motherboards which have the best features available for the money and will be sufficient for any overclockable Intel’s 10th and 11th gen processors. Intel Core i5 9400F was a great success for gaming on a budget. It featured 6 cores and 6 threads with a great capability of gaming and multitasking for just under $150 but after the release of the i5 10400F, the scenario changed and now there is no reason to go for the 9400F as […] 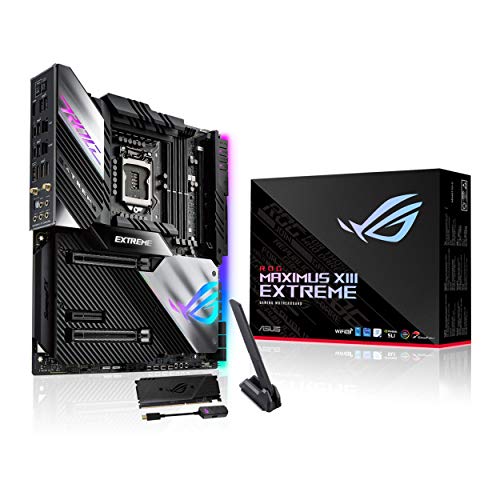 When it comes to extreme overclocking, you can’t go wrong with the ROG Maximus motherboards. Just like the older chipsets, the Z590 from Asus has its own lineup of Maximus motherboards. While the top one is not required for most users and requires a lot more effort in custom loop cooling, the ROG Z590 Maximus XIII Extreme is perfect for those who are going to use an AIO cooler.

The motherboard features an outstanding 18+2 power phase VRM where each phase is rated at a whopping 100Amps and is cooled actively by the large heatsinks on top. The VRM is ridiculous and is overkill for any mid-end processor like i5 11600K. So, better use it with i9 11900K which features 8 cores and 16 threads.

It has all killer features such as advanced onboard troubleshooting and overclocking options if you are going to do trial and error in overclocking. Moreover, it has 5x M.2 connectors for fast NVME drives but be sure to read the documentation before populating each one of them.

At the I/O you will find 10x USB ports including Type C and Clear/Flashback BIOS buttons for easy troubleshooting. For connectivity, the board features 2×2 Tri-Band Intel Wifi and 2x LAN ports that support up to 10G and 2.5 of bandwidth.

The best part is that this board is available for only $500 which is although not cheap but for the specs, it brings to the table for this price, there is nothing better than this one. 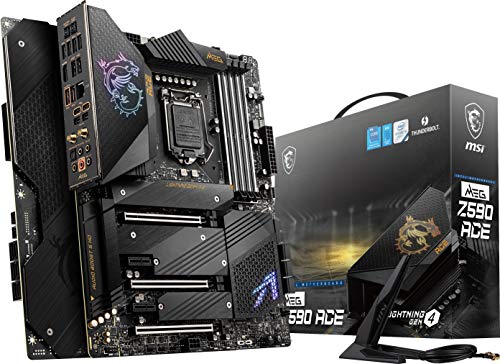 Most high-end motherboards can’t beat the MEG Z590 ACE in a lot of areas and memory support is one of them. While the use of memories with such high clock speeds is still impractical and impossible for many, the MEG Z590 Ace brings an opportunity to push the limits. With the support of up to 5600MHz frequency, it takes the crown for being the best Z590 board for $500 and features a very strong 19-power stage VRM where each phase supports up to 90A of current.

At the I/O, unlike most Z590 motherboards, it comes with 2x Thunderbolt Type C ports that support a transfer speed of up to 40Gbps which is insanely high, and boasts a Wifi 6 adapter too. Its aesthetics is also legendary with the Dragon logo on the I/O cover which covers the big aluminum heatsinks that have a copper heat pipe embedded for awesome cooling.

For troubleshooting, you will get a Q-Code display and EZ Debug LEDs for finding causes of malfunctions, Power/Reset buttons at the bottom and some switches for Bios both onboard and at the I/O. It’s truly a beast and has been among the top performers in overclocking as tested by many reviewers. 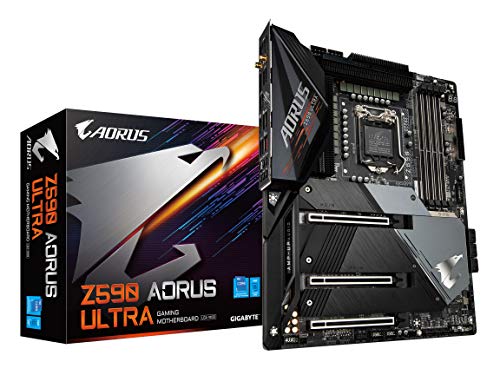 The Aorus Ultra features a very strong 16+1 power phase VRM with each power stage supporting up to 90A of current. These are cooled by the finned aluminum heatsinks which are way better than the traditional ones. So, you won’t have any problems with the strong overclocking of your CPU and with the help of an LCD error display on the PCB, it is only going to be easy to detect the possible fault for not booting properly.

Another distinguished feature of this board is its I/O which is populated with 13x USB ports which are rare to see and the inbuilt Wifi adapter which will give you access to the internet wirelessly out of the box.

The Strix Z590-A Gaming wifi features a powerful 14+2 power phase VRM that uses big and dense heatsinks over them and also on the M.2 connectors as well. The Strix series is very well-known for its premium features and comes in second place from the Asus enthusiast motherboard series that is below the Maximus.

Regardless of that, you can expect this motherboard to overkill processors like i5 11600K and i7 11700K like crazy and maintain that performance for a long period of time especially if you use a liquid cooling solution. The board features 3x PCI-E x16 slots which natively support Gen 4 with the 11th gen processors and Gen 3 with 10th gen CPUs.

The board is definitely great at the I/O with a total of 10x USB ports including USB 2.0, 3.2, and Type C. For connectivity, the board is equipped with inbuilt Wifi 6 adapter and a 2.5G Intel LAN port for flawless internet speed.

Aesthetically also, it is very pleasing with all white-silverish heatsinks and I/O cover along with the RGB ROG logo on the I/O. Currently priced at less than $350, this one is definitely one of my favorite choices to go with. 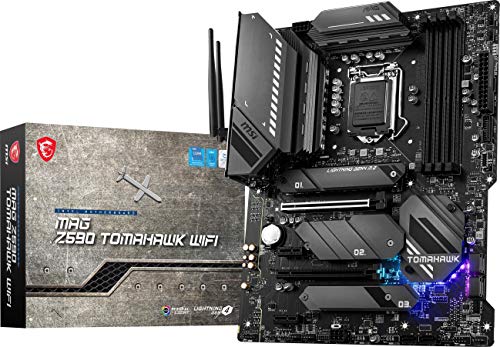 The second-tier MSI motherboards are confusing if you look at them the first time but pricing is what makes the Tomahawk the better choice among all. While other boards are also good, Tomahawk will help you save around $70.

It features a 14+2+1 power phase VRM for stable overclocking and has decent heatsinks for continuous heat dissipation. The board features 4x DIMM slots with support of up to 5333MHz memory and comes with 2x PCI-E x16 and 2x PCI-E x1 slots for expansion cards.

The good thing is that it is equipped with an inbuilt Wifi adapter that is the Intel Wifi 6E AX210 and also a 2.5G LAN. For storage, the board features 6x SATA and 3x M.2 connectors which are common on most tier 2 Z590 motherboards, and some Debug LEDs to troubleshoot problems. Even in 2022, the Intel 10th gen CPUs are still kicking ass for the value they bring for a cheap price. The Core i5 10600K is a top-notch choice for gaming if you don’t have the budget to get the latest-gen CPUs. With a good processor, you also need a good motherboard that allows overclocking […]

As far as the other boards are considered, the Carbon Wifi and Gaming Force are exactly the same board with the same price but differ in aesthetics. They both cost around $350 which is $70 more than the Tomahawk and feature 16+1+1 power phases which are solid for overclocking and will be fine even for the i9 11900K.

There are motherboards like Edge Wifi and Gaming Plus which are behind the Tomahawk Wifi but their prices are still equivalent to the former.

MAG Z590 Torpedo is another good motherboard that you can buy and costs $30 less than the Tomahawk wifi but doesn’t feature any inbuilt Wifi adapter. 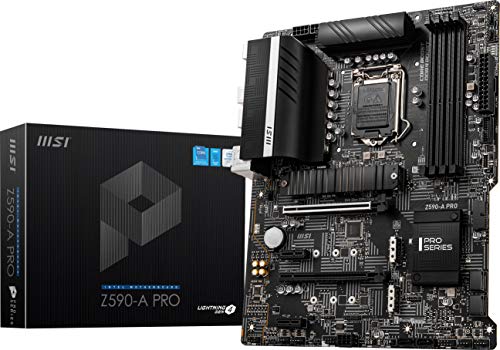 For those who are unwilling to spend over $200 on a motherboard, then the MSI Z590-A Pro is an ideal option that features a 12+2+1 power phase VRM design that is sufficient for a processor like i5 11600K. It comes with 2x PCI-E x16 slots for graphics cards, and 2x PCI-E x1 slots for other expansion cards, and supports up to 5333MHz memory speeds.

For $189.99, the board is not bad at all and comes with 6x SATA ports and 3x M.2 connectors. Other features such as Debug LEDs and Bios Flash button is also onboard to make things a little easier. Unless you can’t stand its confusing and terrible zig-zag line pattern on the PCB, there is no loss going with this board.

Out of dozens of Z590 motherboards, the above-mentioned 5 stand out and while there are other good boards too, you won’t be getting additional benefits except for different aesthetics. Let me know which motherboard from Z590 you like the most and what motherboard you think should have been made to the list.